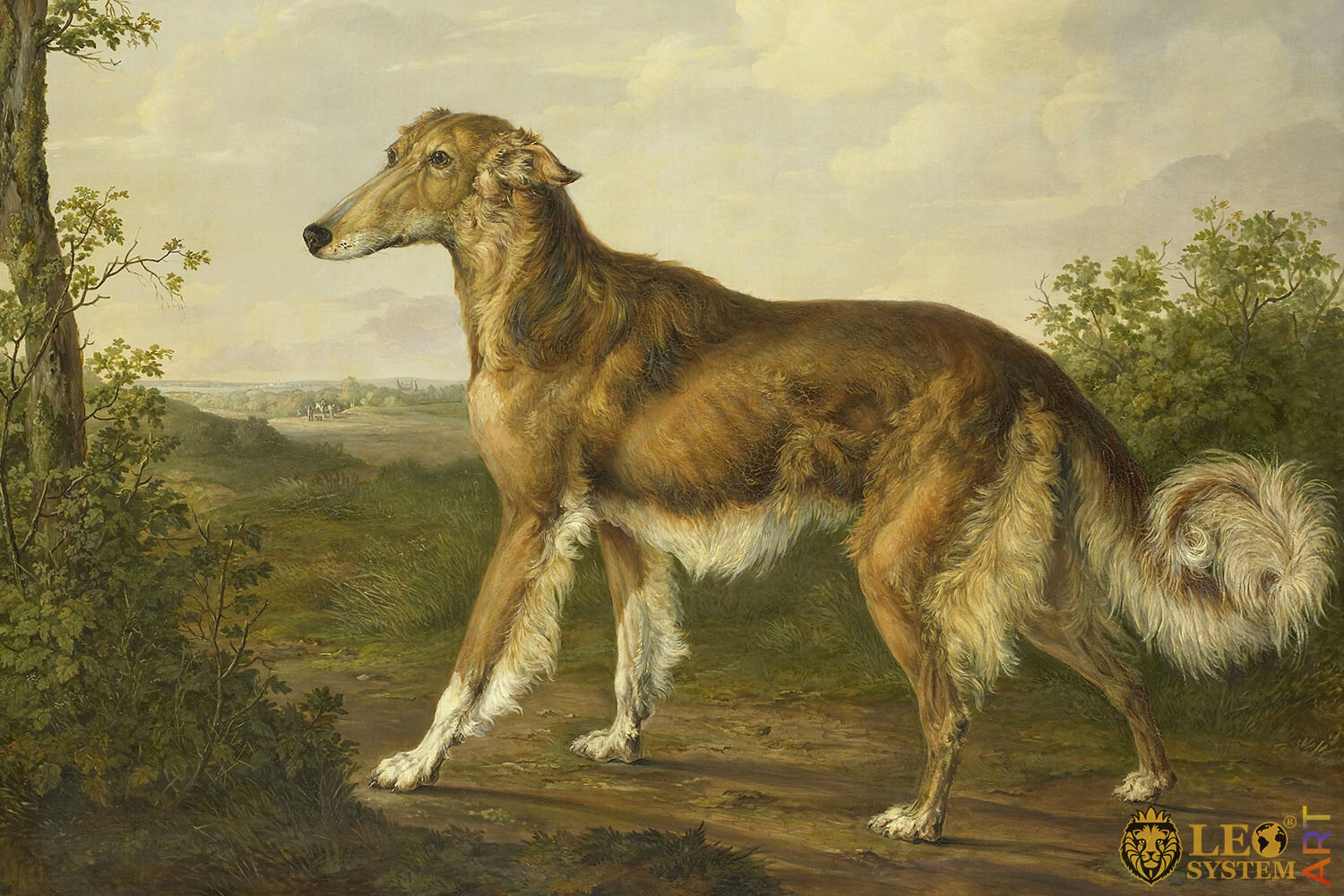 Many people find it easier to get along with dogs than other pets. These loveable cousins of the wolf come in all shapes and sizes, as well as also personalities. So, it is little surprise that one of our favorite four-legged companions is a popular thing to paint by both hobbyist painters as well as the best painters of a particular era.

What is even more impressive is that all of the famous paintings that we have featured below, is that they are write at a time where photography was limited and very expensive. Therefore, all of these stunning paintings have been written either from memory or observation.

In this article, we are going to be telling you about some of the most famous paintings with dogs. 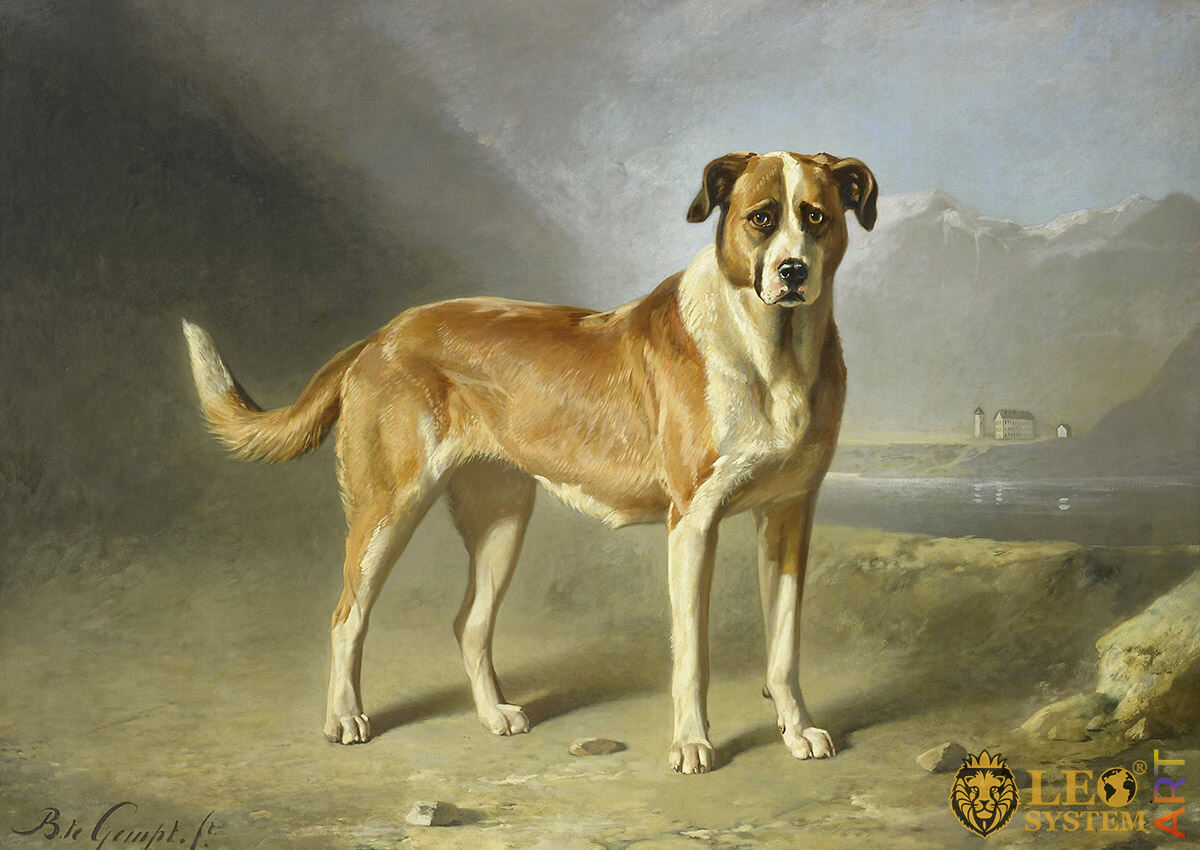 Some of his fictional paintings include an artwork called ‘Two hares with a knapsack, a castle beyond’ which is a painting of two rabbits dressed in suits holding a backup made up of cloth hanging on a wooden stick. Later in his career, Bernard worked as a photographer.

The Saint Bernard Dog is a dog breed that originates from the western Alps which are located in Switzerland and Italy, it is a very large dog that traditionally has been used for hauling heavy goods and also as a rescue dog for people that have got lost or stranded in the Alp mountains which are the tallest and biggest mountains in all of Europe.

It is a well-respected dog for its power and loyalty, due to this it is the national dog of the country of Switzerland. It is not known whether Bernard te Gempt developed an interest in drawing the Saint Bernard breed due to the similarity between the dog’s and his name. 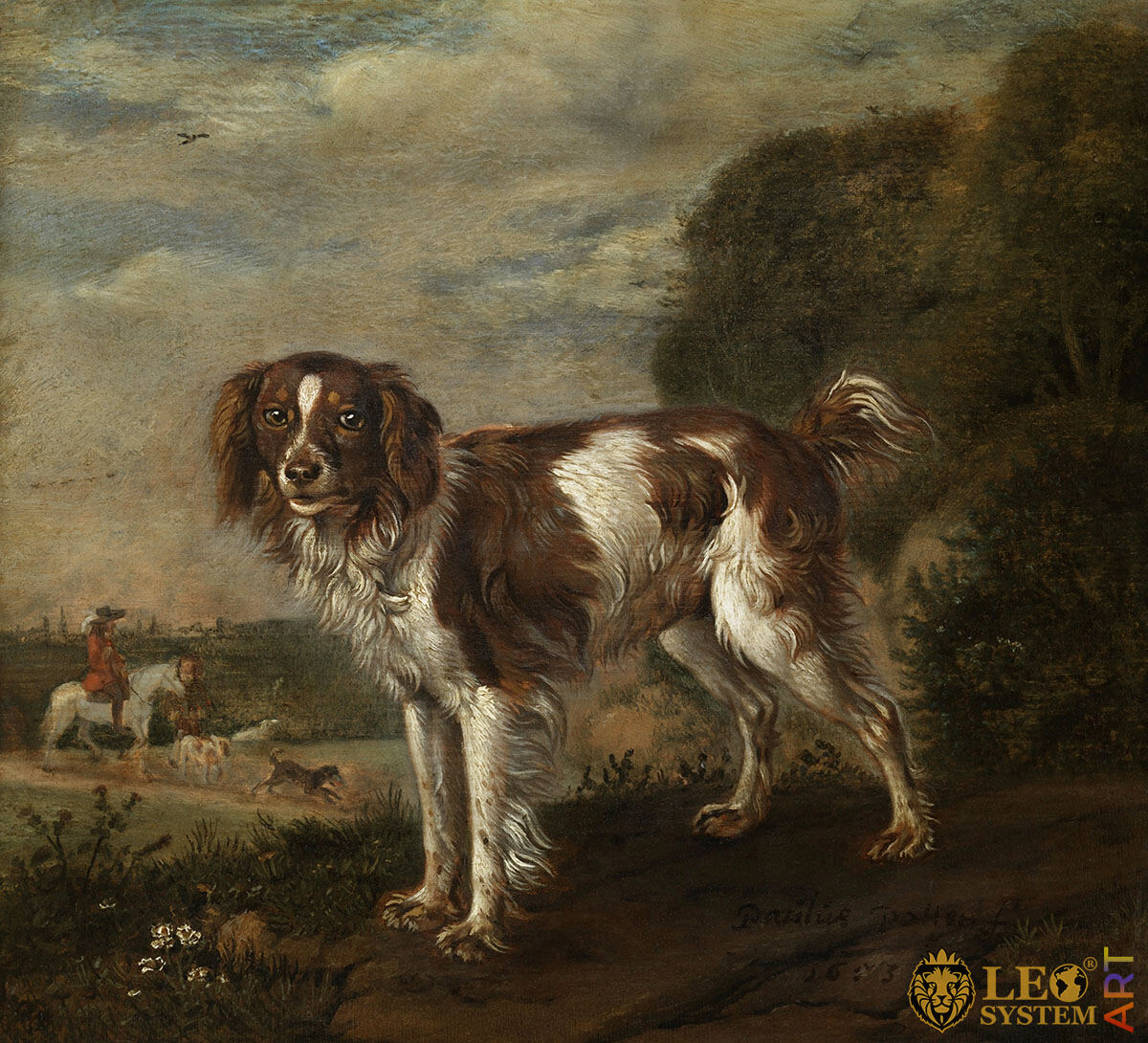 A Spaniel is an oil painting that was completed in 1653, the main character in this spaniel dog while in the background there is a hunter on horseback surrounded by at least two other dogs that are most likely also of the spaniel breed.

The painting was created by Paulus Potter who was born in the coastal city of Enkhuizen before moving to Amsterdam where he spent the majority of his life. Potter came from a rich family, that made its fortune from the construction industry.

Paulus Potter focused mainly on painting landscapes and animals such as cows, goats, sheep, and dogs of different kinds. His painting style is known for being painted from a low height perspective, which gives a more personable and detailed look.

During the mid-17th century, the spaniel was a luxury dog breed that was used mainly for chasing prey that would then be shot for sport by hunters and then retrieving the prey to its owner. Spaniels are a perfect species for the Netherlands as it is great for land and also water, with much of the Netherlands being constantly flooded due to lack of dams during that day and age. 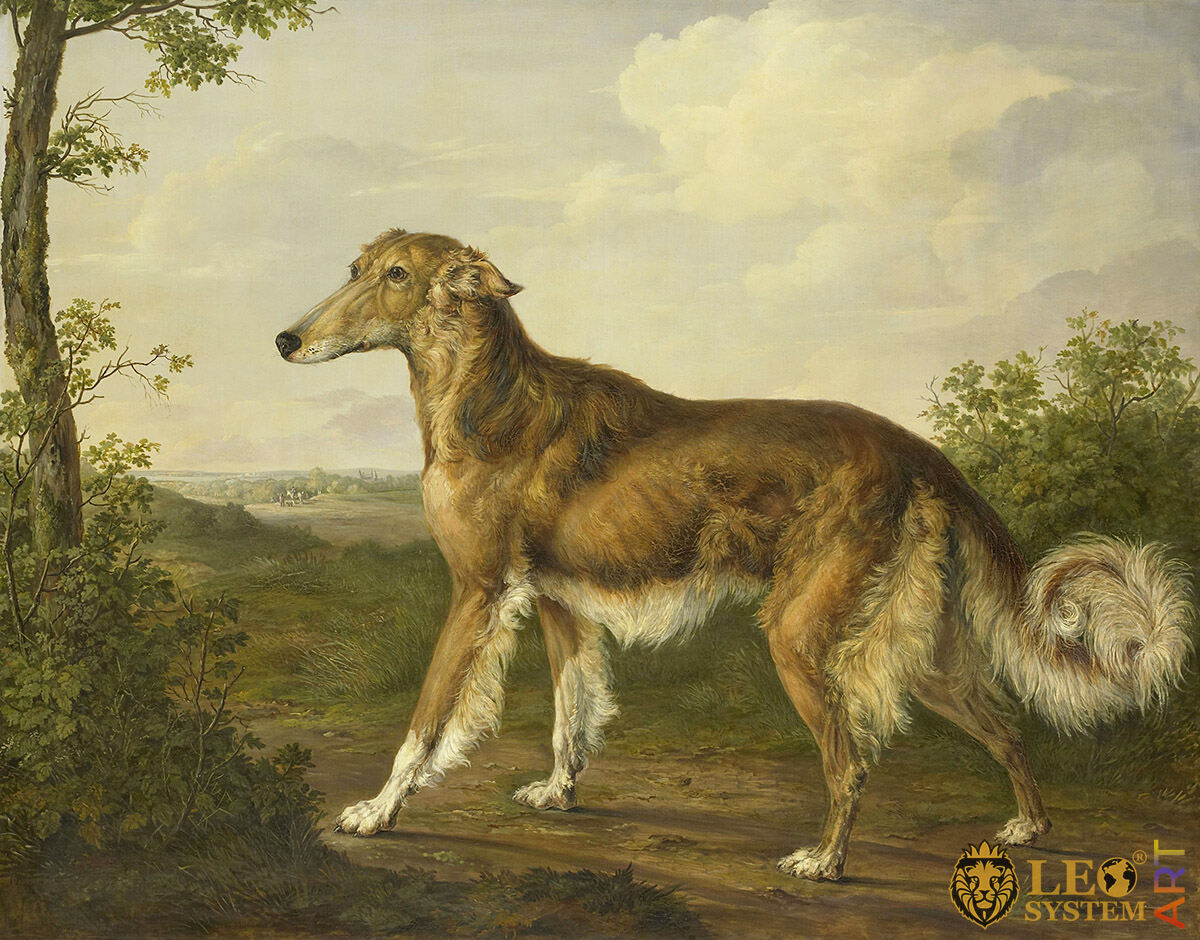 While in the background on the left you have in the distance a man on top of a horse and another man on foot as well as other dogs surrounding them. A river can also be seen in the distant horizon, as well as what looks like a town or city.

The creator of the painting is Jan Dasveldt who is a Dutch painter born in Amsterdam in 1770. His other famous painting is called Two Dogs, which features a spaniel and a sighthound.

The Siberian Greyhound is a type of greyhound that was specifically bred in Imperial Russia for the Tsar, with the aim of having a fast hunting dog that also had a thick enough fur for the cold Russian winters. Due to their thick and long fur, they are not as fast as the stereotypical greyhound, as they are less aerodynamic. 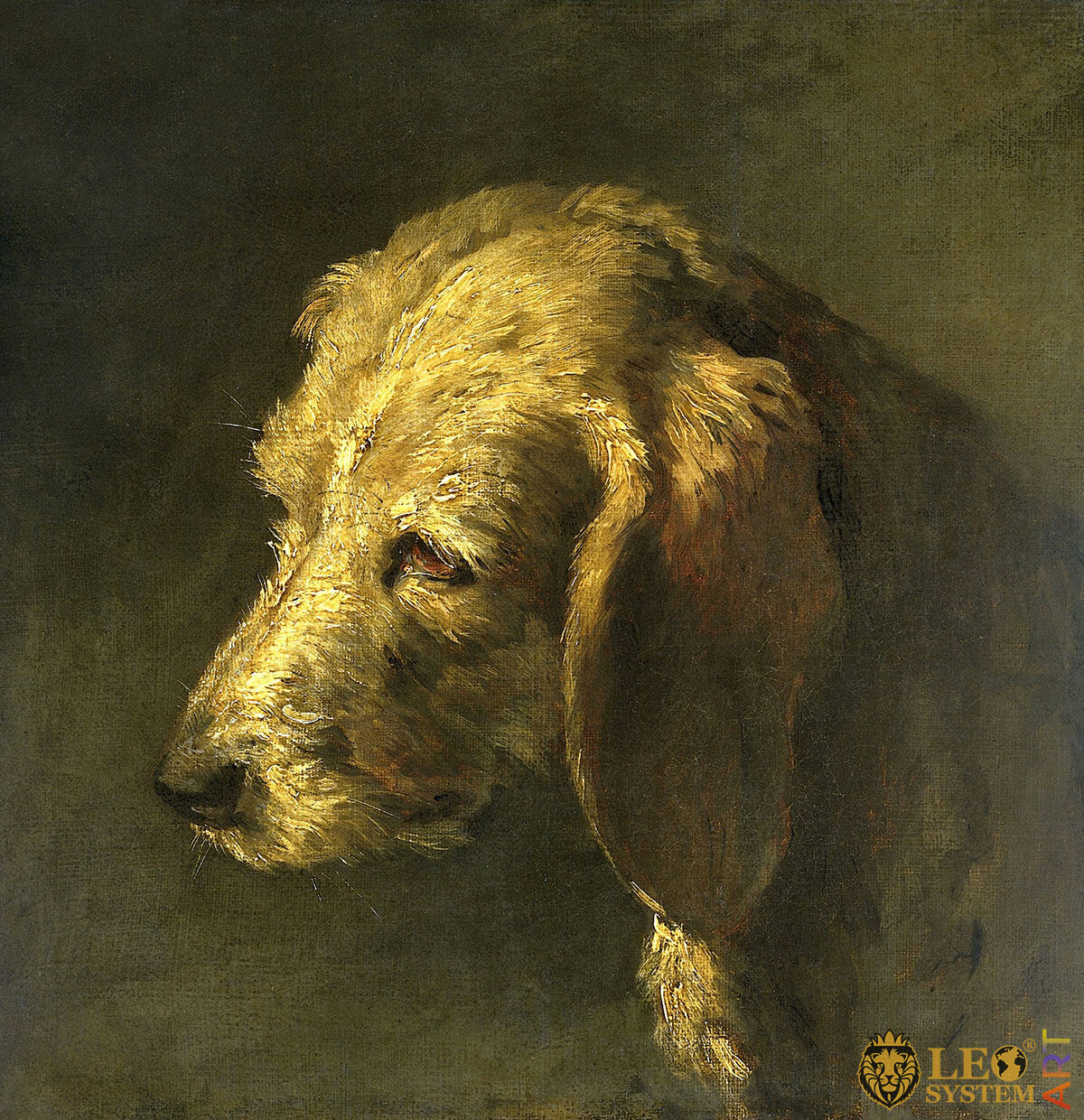 In this painting called Head of a Dog, we have the head of a dog that is looking to the left. The beauty of this painting is that it is left to the observer to imagine what is going on in the painting and the emotions of the dog. It is a great quality that many other iconic paintings have, such as the Mona Lisa painting, for example.

The Head of a Dog is painted by an artist called Nicolas Toussaint Charlet who was a French painter born in Paris who specialized in the painting of art to do mainly with the military campaigns of the First French Empire under Napoleon Bonaparte. It is believed that the Head of a Dog painted was created sometime between 1820 and 1845.

Today the painting is displayed in the Rijksmuseum which is a large art museum located in Amsterdam, in the Netherlands. The painting has been part of the museum’s collection since 1907. It is a very small painting compared to many of the other amazing paintings that we have included in this article, the Head of a Dog measures h35 x w35 x d8 centimeters in size. 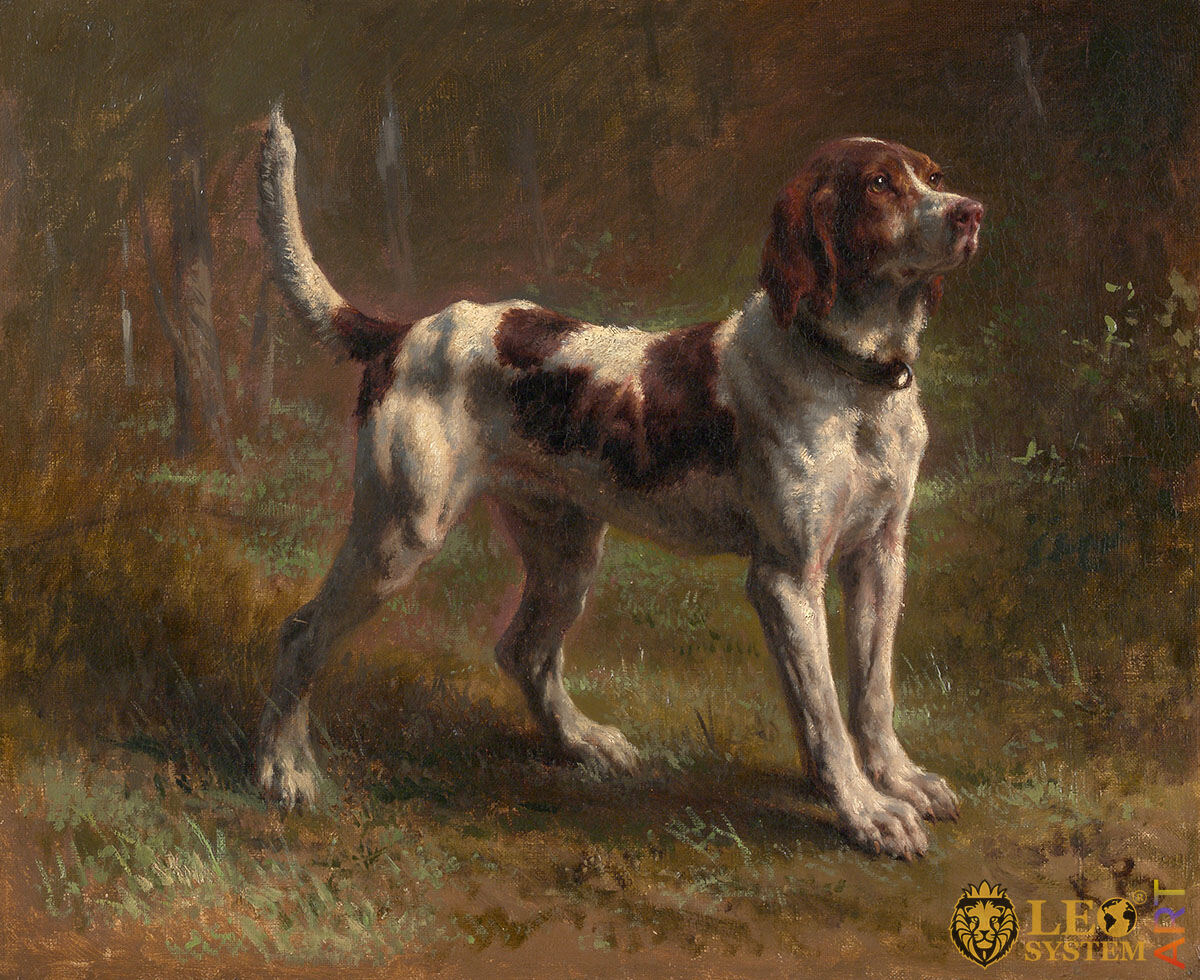 Finally, in this article about famous paintings with dogs, we have the A Limier Briquet Hound painting which is a portrait painting of a hunting dog that is owned by an individual called Vicomte d’Armaille.

The main subject of the painting is the dog, while around it, you see parts of the forest such as bushes, shrubs, and trees, however it is important to note that the background and surroundings are not very detailed which is likely done on purpose by the artist.

A Limier Briquet Hound was completed sometime in the year 1856 by Rosa Bonheur who is the only female painter that we have in this art article.

Rosa Bonheur is a French artist who was born in the southwestern city of Bordeaux in France, from an early age Bonheur was exposed to the arts with many of her family members being artists. Throughout her career as an artist, Bonheur made her name for her portraits of animals such as well as sculpting that employed a realistic style. 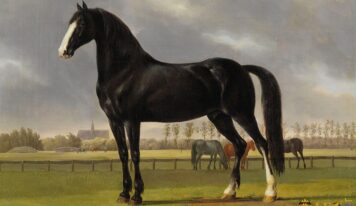 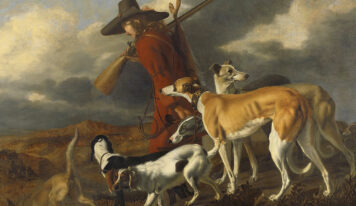 Fascinating Paintings with the Participation of Dogs 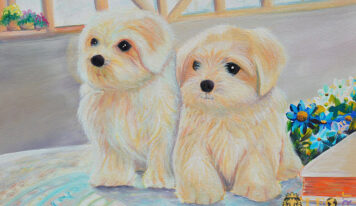 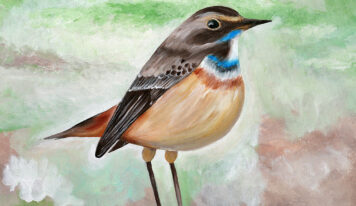 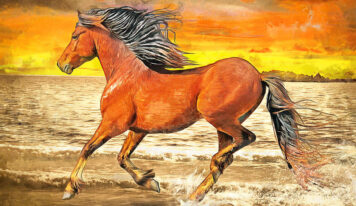 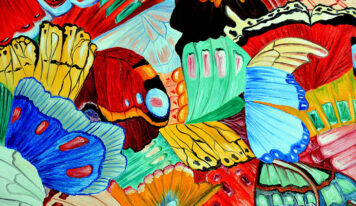 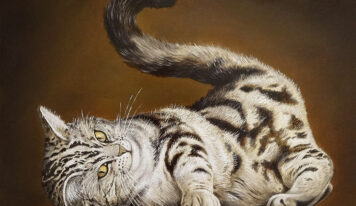